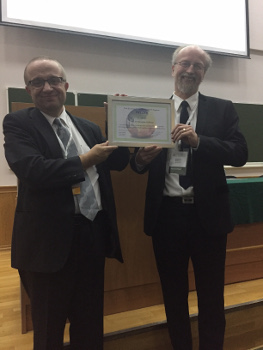 Alexander Baklanov, professor, has more than 30 years of experience in environmental and atmospheric research, in particular in developing a new generation of online coupled meteorology-chemistry models. He has published about 400 scientific publications, including 14 books and almost 200 peer-reviewed papers and led many international research projects, supervised 10 PhD students, he is a visiting, adjoint, honour professor in four European universities, organiser of several international scientific conferences and young scientist summer schools, Editor in chief of the Urban Climate journal. Worked in international research teams in Russia, Austria, Sweden, Denmark, Switzerland.

The first PEEX Fellows nominated on 18.May.2016, Beijing, China 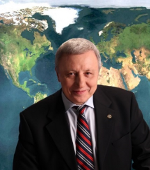 Academician, Professor Valery Bondur is a Director of AEROCOSMOS Research Institute for Aerospace Monitoring and a Presidium member of the Russian Academy of Sciences. He leads the Section of Oceanology, Atmospheric Physics, and Geography of the RAS Earth Sciences Branch. His scientific activity is related to the Earth research from space, development of basic physics and system-wide principles for creation of aerospace systems for monitoring of ocean, atmosphere, land, geological environment, and near-Earth space in the context of the Earth sciences, environment protection and conservancy, prevention of dangerous natural and technogenic processes, etc. He has published more than 300 peer-reviewed research articles (about 600 scientific works in total) with >5200 citations. His h-index is 42 in RSCI. He acted as a Principal Investigator of 50 national and 10 international research projects (EU, USA, and China). Academician Bondur has been twice awarded the Russian Government Award in the sphere of science and technology. He has other various governmental awards of the Russian Federation. He has supervised 24 PhD theses and 10 doctoral theses, more than 30 times he acted as an opponent at PhD defenses. He reviewed 96 papers in 10 journals. He is an Editor-in-Chief of the “Earth Research from Space” Journal, a member of editorial board in “Oceanology”, “Geodesy and Cartography”, “Aerospace Research in Bulgaria”, and “Marine Hydrophysical Journal”. 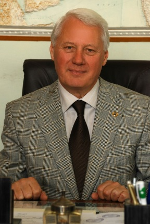 Nikolay Kasimov is the Russian scientist, Professor at Lomonosov Moscow State University and Full Member of the Russian Academy of Sciences. Nikolay Kasimov received his PhD in Geography studying landscape geochemistry of fault zones in 1972 and gained Doctor of Science for research of paleogeochemistry of steppes and deserts landscapes in 1983. Since 1987 he heads the Department of Landscape Geochemistry and Soil Geography. Since 1990 till 2015 he was a dean of the Faculty of Geography at Moscow State University and afterwards from 2015 to the present days he became the President of this faculty. First Vice-President of Russian Geographical Society (since 2009). Reviewer for “Applied Geochemistry”, “Sedimentory Geology”, “Quaternary Geology”, “Eurasian Soil Science”, “Pedology”, “Ecological Modelling”. Founding member and co-editor-in-chif, “Geography. Environment. Sustainability” (2008, in Engl., Moscow). Member of the International Geographic Union. Member of the International Soil Science Union. Co-coordinator of the scientific Dutch-Russian (NWO) and Flandrian-Russian projects (1993-2008). Caspian Region: environmental consequences of sea level risen (quaternary geology, geochemistry, geophysics of the deltaic geosystems. Coordinator of British-Russian educational projects (Dep.of Environment, GB; British Counsil). Coordinator of many scientific projects: Russian foundation for fundamental research, Ministry of Education and Science RF, Ministry of Natural Resources and Environmental (1994-2014). Over the last 5 years published 92 works. At Moscow State University he has courses of lectures: "Geochemistry of the landscapes", "Geochemistry of natural and anthropogenic landscapes”. He also gave lectures in Sofia, Havana, Barcelona and Cambridge Universities. He is author of about 200 scientific works, including 5 monographs and educational textbooks.

Prof. Congbin Fu is a professor of climate change at Nanjing University, China. He is an academician of Chinese Academy of Sciences. He is currently serving as the director to the Institute for Climate and Global Change Research at Nanjing University and the Collaborative Innovation Center of Climate Change of Jiangsu Province, China.Professor Fu is one of the earliest scientists engaged in the studies on climate and global change in China. His expertise includes atmosphere-ocean and land-atmosphere interactions, Asian monsoon climate and regional climate modeling. He has published 8 books/chapters and more than 200 peer-reviewed papers in international journals. He is one of the earliest scientists proposing the theory and method in differentiating the El Nino patterns based on the zonal sea surface temperature profile in the Equatorial Pacific. Prof. Fu has been actively involved in international academic organizations. For example, he served as the Executive member of ICSU (International Council of Science Union), a Vice-President of China Association for Science and Technology, and the President of Pacific Science Association, Scientific Steering Committee member of IGBP, the founder and the first Chair of MAIRS (Monsoon Asia Integrated Regional Study). He is also a foreign member of Finnish Society of Sciences and Letters of Finland, and awarded honorary doctorate from University of Gothenburg. 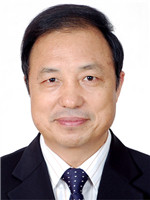 Huadong Guo is a Professor of the Chinese Academy of Sciences (CAS) Institute of Remote Sensing and Digital Earth (RADI), an Academician of CAS, and a Fellow of The World Academy of Sciences for the advancement of science in developing countries (TWAS). He presently serves as President of the International Society for Digital Earth (ISDE), Past-President of ICSU Committee on Data for Science and Technology (CODATA), Science Committee Member of the Integrated Research on Disaster Risk (IRDR) programme co-sponsored by ICSU, ISSC and UNISDR, Editor-in-Chief of the International Journal of Digital Earth and Chairman of the Chinese National Committee for ISDE and China Committee for IRDR. He also serves as Director of the International Center on Space Technologies for Natural and Cultural Heritage (HIST) under the Auspices of UNESCO, and Director of the CAS-TWAS Center of Excellence on Space Technology for Disaster Mitigation (SDIM). Prof. Guo has over thirty years of experience in remote sensing, specializing in radar for Earth observation and research on Digital Earth. He has been the principle investigator for over thirty major national projects in China, and principle investigator for seven international radar remote sensing projects. He has published more than four hundred papers and sixteen books, and is the principal awardee of thirteen national and CAS prizes, one being “National Outstanding Expert”, awarded by the State Council of China. He also received the N.M. Przewalski Gold Medal awarded by the Russian Geographical Society, and the Boon Indrambarya Gold Medal awarded by the 30th Asian Conference on Remote Sensing.

Cookies make it easier for us to provide you with our services. With the usage of our services you permit us to use cookies.
Ok